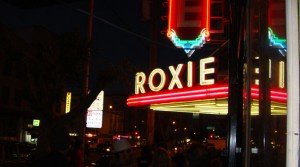 We are thrilled to be holding the United Film Festival – San Francisco again this year at the historic Roxie Theater. The Roxie was built in 1909 and is the oldest continually operating movie theater in San Francisco to date. It has held the name ‘The Roxie’ since 1933, previously being named such titles as the The Poppy, The Gem, and The Gaiety. After years of ownership being passed around, being previously owned by New College of California, The Roxie was purchased by a private investor in 2008. Since then it has been established as center for historical film and theater. A wonderful piece of history for such a fantastic city, The Roxie has been the home of the United Film Festival – San Francisco since it began four years ago.

After three amazing festivals in Los Angeles, New York and London this year, we are already programming for San Francisco. The festival will be coming to The Roxie August 31st-September 6th so make sure to visit the website for updates on the lineup.