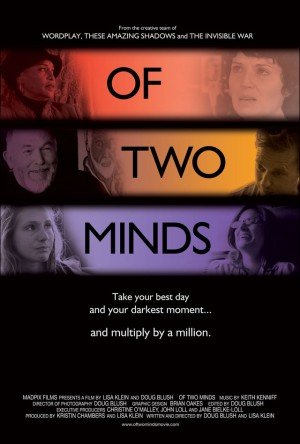 In an fascinating illumination of bipolar disorder, the documentary ‘Of Two Minds’ follows the lives of three different people living with the disorder and how they function day to day. It is apparent the film does not strive to dramatize the lives of these people, but rather unearth the immense struggle they endure living with a mental illness.

The creators of the documentary have close ties to the disorder, which allows for even more heart and vulnerability within the film. Lisa Klein and Doug Blush are a husband and wife team that directed the film together. Lisa had a sister diagnosed with bipolar disorder who passed away in 1994. This film is dedicated to her sister, Tina, in hopes to show others suffering that they are not alone.

Something amazing about this documentary is the raw emotion it portrays. Over a span of three years, these filmmakers dedicated their lives to telling the stories of these people. Rather than displaying a clinical perspective, it delves deep into the world of these people to make sure they are depicted as real human beings rather than test subjects. If you want to experience emotion in some of its purest form, watch this documentary.