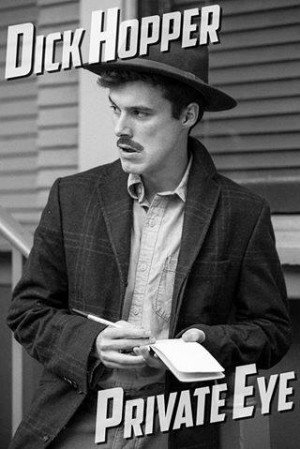 Synopsis
In the first two episodes of Dick Hopper, Private Eye we witness a ghastly murder and meet the murdered man’s ghoulish murderer. Our murderer, Vincent Dinero, fears he will be apprehended and enlists the services of one Dick Hopper. Dick is a private detective who doesn’t play by the rules and has his own ideas about who is “innocent” and “guilty” or what is “right” and what is “left.” He is the only one who believes Vincent’s story and is convinced the true culprit is Vincent’s painfully sweet brother Earnest. After Vincent is arrested for the crime he quite clearly committed it is up to Dick Hopper to prove everyone wrong… but what happens when Dick stumbles upon a conspiracy that only someone looking in all the wrong places could expose?

Playing With
In Touch, #140 Characters: A Documentary About Twitter