Audience Awards
Feature Length Narrative – Self-Delusion and Other Obstacles
Feature Length Documentary – Mud and Guts: The Search For Water In La Gonave, Haiti
Short Film – This Is My Home

Feature Comedy
Winner:
Pearl by Lyvia A Martinez
Synopsis: ‘Now that you’re growing up, you will find out who you truly are.’ When Pearl starts the 7th grade and receives those words of wisdom, she panics, thinking they mean she hasn’t been anybody all along. So she decides she has to find out who she is and what she’s meant to do. And she will do it in one semester. She drags her friends and family into an adventure of exploration into identity, misconceptions and, ultimately, what it means to be one’s self.

Finalists:
How I Became A Chick With Average Breast Size by Dongwon Kang
Synopsis: Mary, an average looking high school girl, who wants to be part of the in-crowd, finds out that Roy, the popular football heartthrob, is secretly gay. They agree to fake being in a relationship together to keep his secret and boost her high school status.

Larry’s Best Friend by David Hill
Synopsis: Ginger was a Golden Retriever magically transformed into a beautiful, intelligent woman, who strives to adapt to the human world, much to the chagrin of her master. Adapted from the award winning stage play.

Feature Drama
Winner:
What Becomes for the Little Boys by Robert Molund
Synopsis: An older brothers attempt to reconcile with his younger brother and their struggle to get beyond the past of an abusing father – leading them up the Alps of Tour the France in a cycle race that started just as any other but in the end is about ever coming home at all.

Finalists:
The Song by David Kauffman
Synopsis: Ben Cantor, a 40-something composer enters a Songwriting Reality Show Contest called THE SONG, against the wishes of his wife, boss, and banker. After handily winning the first two rounds, he is unfairly disqualified by the show’s producer, who has already picked his winner! Ben must face the producer and his own ‘am-I-worthy?’ demons in order to have a shot at winning the Finale.

Postcards in the Attic by Lindsey Foulkes
Synopsis: A bi-racial young man seeks acceptance by traveling the world, only to finally find it in his hometown. Tim seeks to leave the abusive racism of his grandparents and joins the Merchant Marines to take him as far away as he can dream and away from Noel, the girl he loves. He promises Noel he will write her postcards for the next five years. During his leave, Noel moves and a new girl, Agnes, moves in. She reads the postcards left behind and falls in love with their writer. When Tim returns, he doesn’t find what he left but finds exactly what he needs.

Feature Horror/Thriller
Winner:
11 by Troy Taylor
Synopsis: Stranded in an abandoned subway carriage, eleven strangers must work together to escape the evil that awaits them in the dark tunnels of the New York City underground.

Finalists:
Seeing Red by Sundae Jahant-Osborn
Synopsis: DEXTER meets BASIC INSTINCT… When a lonely, guilt-ridden werewolf falls hard for one of his beautiful redheaded victims, he must conquer his own murderous instincts to win her love. But a second mysterious killer with his same m.o. may literally kill his only chance at happiness.

Touching Dark by Chris Webb
Synopsis: Touching Dark is a taut psychological thriller, laced with deadly romance. A man who can travel into the past, accidentally changes history, now he must stop the person who killed the woman he loves, he must stop the infamous murderer, Jack the Ripper.

Short Comedy
Winner:
The White Room by Daniel Burn
Synopsis: A young man awakes to find himself in an unfamiliar place, with no idea how he got there, and only one way out.

Finalists:
Irishry by Jackson Williams
Synopsis: What do some of Ireland’s greatest literary minds spend their time doing now they are resting among the clouds? Oscar Wilde, James Joyce and W.B Yeats await the arrival of the forth member of their party and while doing so, discuss among other topics, the Platypus, Jackie Kennedy and Whiskey.

Death Drives an Import by David Eyman
Synopsis: A man stuck in the morning commute must stop Death from getting to the scene of an accident.

Short Drama
Winner:
Blackberry Blossom by Sydney Armstrong
Synopsis: A young girl learns the old time music of the Appalachians from an old mountain woman. As she grows older, she learns the value of those musical traditions and how to pass them on in turn to a new generation.

Finalists:
Tiger Lily by Brandi Alyssa Young
Synopsis: Tiger Lili is a coming of age story of a young girl who decides she is no longer going to suffer the abuse she endures and decides to fight for her life and become better than the cards the hand of fate have dealt.

Nurse Roberts and the Five Cent Song by Eileen-Rita Folwell
Synopsis: A family is torn apart during the Christchurch earthquake and need love, music and a touch of magic to bring them back together again.

Short Horror/Thriller
Winner:
This Vehicle Has Been Checked for Sleeping Children by John Burdeaux
Synopsis: A school bus driver is toyed with by a menacing presence in the last row of his vehicle.

Finalists:
Wiked by Lior Lederman
Synopsis: one man discovers the truth about Wikipedia. Either that or he’s gone completely insane…

Killing Time by Douglas Mattingly
Synopsis: A wannabe-anything decides to seek quick fame as a serial killer, but when faced with the reality of actually carrying it through, decides too late that it’s not his thing.

Audience Awards
Feature Length Narrative – Eagles in the Chicken Coop
Feature Length Documentary – GLOW: The Story of the Gorgeous Ladies of Wrestling
Short Film – One Punch at a Time

We were happy to honor Mark Rydell & Dabney Coleman by placing their handprints in front of the historic Vista Theatre prior to a celebratory screening of On Golden Pond.

Thank you to our finalists and congratulations to the winners!

Feature Drama
Winner: Bare Knuckle Days by Neil Chase
Synopsis: After saving the life of an aging mob boss, a bullied boy forms an unlikely friendship with the reluctant enforcer ordered to protect him.

Feature Horror/Thriller
Winner: The Feeding Cycle by RC Speck and Daniel Maidman
Synopsis: Is the latest zombie menace caused by a long-dormant microbe that returned Christ from the dead? Or is it truly an act of the Devil?

Short Comedy
Winner: Close Call by Shane McCabe
Synopsis: A week before his wedding, Mike confesses to his two friends that his future sister-in-law tried to seduce him. Mikes friends are anxious to hear the full story but are shocked at how things played out.

Short Drama
Winner: The Dan Dedman Song Factory by Jeremy Burgess
Synopsis: When Wallace gets an unexpected phone call from one of his favorite musicians, he thinks it’s the coolest birthday present he’s ever received. But by the end of their conversation, he realizes that it might’ve been more like a wake up call.

Short Horror/Thriller
Winner: The Invitation by April Wolak
Synopsis: A woman attempting to reignite her marriage through experimental methods, encounters a dire outcome. 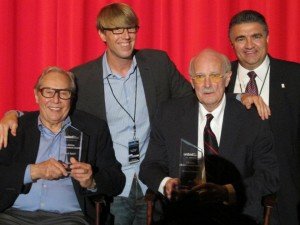