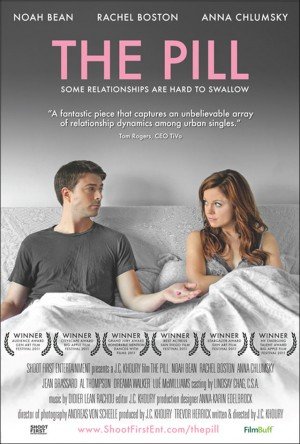 In a completely original and genuine take on a romantic comedy, ‘The Pill’ offers a charming look at an unfortunate situation. When Fred and Mindy enjoy a night together after a chance meeting, the next morning brings havoc when Fred realizes she is not on the pill. Over the next twenty-four hours, Fred makes it his mission to ensure that Mindy consumes both morning after pills in order to circumvent the result of unprotected sex. Trying to avoid encountering his actual girlfriend, he spends the day on an unusual journey with Mindy, ultimately realizing there might be more between them than he originally thought.

What is so appealing about this film is its realistic nature. The characters are so dynamic in their vulnerable, real life moments. Chaos ensues from everyday occurrences, an affect of life in general. The couple is taken on this roller coaster ride of emotions over such a short period of time, and an audience member is allowed into their world for a front row seat.

The Pill is showing at United Film Festival – New York on Tuesday, May 15th at 9:30pm.