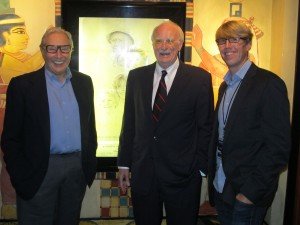 Last night the United Film Festival kicked off the 2012 season by honoring Mark Rydell and Dabney Coleman. The event was set to start at 7:30pm, and by 6:30 supporters and fans of the dynamic duo were already lined up outside the theatre to witness the event. By the time the cement was ready, over 100 people gathered to watch Mr. Rydell and Mr. Coleman place their hands and sign their names. With so many onlookers, it was wonderful to witness the support given to the honorees. An immense amount of respect was felt the entire night for the work that Mark Rydell and Dabney Coleman achieved throughout their careers.

Before the movie began, Mr. Rydell and Mr. Coleman graciously agreed to a Q&A. In a display of true friendship, they both discussed their experiences with the film and shared some great stories. The audience was captivated as Mr. Coleman got emotional about his experience and the lifelong friends he made during production. As the Q&A began to wind down, our founder Jason Connell surprised both honorees with a Lifetime Achievement Award, which was perhaps the most poignant moment of the evening. Both Mr. Rydell and Mr. Coleman were sincerely touched by the gesture, and it was evident that they were grateful to be receiving such an honor.

After the ceremony, the film began and audience members prepared themselves for two hours of movie magic. The film remains a staple in Hollywood history, a testament to its brilliance. In a day and age where movies rely on computer graphics and intense sound effects to keep the attention of a viewer, this film is able to achieve it with sheer talent. After the screening, the audience clapped loudly to signify their appreciation to Mark Rydell and Dabney Coleman for such unprecedented work. Thank you to everyone who came out to experience such a great evening, and congratulations to Mr. Rydell and Mr. Coleman for their Lifetime Achievement Awards.