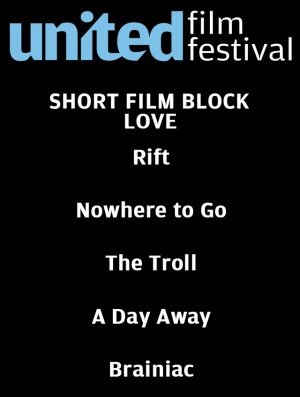 Rift: A family man struggling to cope with his hidden urges has his devotion challenged by the unexpected arrival of his secret lover.

The Troll:Under a bridge in Downtown, Los Angeles, lives a mythical Troll, there to protect and watch over the bridge. He leads a lonely existence, until fate intervenes and he crosses paths with a woman about to jump off the bridge’s ledge.

Brainiac: Daniel, an introverted inventor, attempts to charm his neighbor, Sheila, by creating a mind-reading helmet that helps her see her own thoughts. Daniel soon discovers that Steve, Sheila’s manipulative ex-boyfriend, has repurposed the helmet for his own insidious intentions. Daniel must save Sheila from Steve’s brainwashing conspiracy.

The Troll: Director in Attendance